The importance of citizen participation in decision-making was highlighted yesterday evening at a public meeting in Penarth, South Wales, attended by 147 frustrated citizens who showed their willingness to participate in their communities decision-making.  An attempt to force the Vale of Glamorgan (county) council (Vale council) to hold a referendum on proposals for the National Cycle Network (NCN) failed by just 17 votes.  133 votes against 5 were for a referendum on the matter, with 150 votes needed under current legislation.

Whilst it may be true that those attending were most likely to be those with the strongest views against the proposal, 133 people is a significant number – especially when they gave up time on a warm, sunny summer evening to participate in a community debate.  It was unfortunate that the administration of the public meeting by the town council was a bit chaotic and referred to as a “shambles” by a number of participants – administering the legal voting slips took longer than expected with many citizens not knowing which electoral ward they lived in.

The problems are clear:

The controversial proposals come from a 2008 “feasibility study” by Sustrans that has been adopted by the Vale council to build cycling infrastructure for Route 88 of the NCN, when external funding allows – £250,000 has recently been awarded to the council for this project.  Back in 2008, on agreeing to conduct the feasibility study, Sustrans should have been knocking on doors, standing in streets, attending events and engaging with all local people.  Local people should have felt that they had contributed to the plans being drawn for their community by Sustrans – not just “cycling experts”. 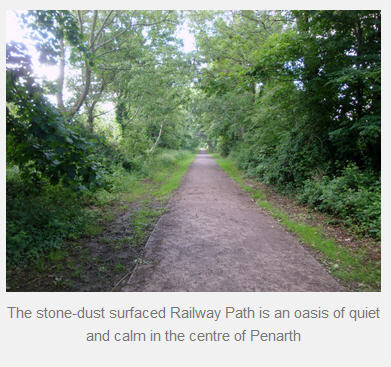 Although the “feasibility study” of NCN Route 88 was conducted and delivered in 2008, few have seen its contents or proposed route.  Neither the council nor Sustrans have published a (legible) map of Route 88 online, although snippets from planning documents seems to show the route ignoring many local destinations, including a National Trust property and children’s farms and playgrounds – the places families are likely to want to cycle to for leisure – or utility.

Citizens object to lack of consultation

Citizens in Penarth have strongly objected to the lack of consultation and plans for a former railway line that runs through Penarth resulting from the “feasibility study”.

The former railway line has for decades served as an unlit, secluded green corridor for wildlife, and a shared-path for horse riders, people on bicycles, runners and walkers behind the deep gardens of local houses.  The path also runs over a small, but greatly valued, “green” across the fronts of two residential terraces.

This March, unannounced, the council did preliminary work for a new 2.5 metre wide bitumen surface, cutting back the vegetation alongside the path, and spaying herbicide.  Apparently the clearance work was done prior to an environmental impact assessment.

The local community, unaware of the Sustrans report/study, was immediately alarmed, and on asking questions to the council, were shocked to hear that their stone dust path was to be replaced by a 2.5 metre wide strip of ‘tarmac’ and that the path was to also cut through a 16m wide green where no formal path exists today.  Their very valid concerns include the suitability of bitumen for horses, ice on the bitumen in winter, damage to tree roots in laying the base of the surface, the aesthetics of the scheme and the speeds that cyclists may reach on a hard smooth surface, rather than on stone dust and the fact that the community does use the green for purposes other than a transport corridor.

The resulting public outcry, and the launch of a campaign to “Save Penarth Green”, resulted in an “exhibition”, advertised as a “consultation”.  Representatives of Sustrans (not members of the local community) were unfortunately quoted at this event as saying:

There was further outrage when following this meeting, planning documents were published, dated prior to the consultation, and with no changes made as a result of the “consultation”.  People believe that they were not listened to and that their participation at the “consultation exhibition” had been a futile exercise.

The primary objection to a “tarmac” surface on the shared-path is the potential speeds that can be reached by people on bicycles on this surface.  Suggestions by Sustrans and/or Vale council engineers that bollards and other “obstructions” may be placed at each end of the path to prevent excessive speeds by people on bicycles are rightly dismissed by the community.

There are other questions regarding the suitability of the path to achieve the aims of Sustrans and the council.  Not long ago, the end of the former railway line by the town centre was built on, with the path diverted from the former railway line into a curving alleyway between two high walls of 1.6 metres in width and 123.5 metres in length with a 90 degree corner.  Given that some bicycle trailers used to pull children, etc., such as the Chariot Carriers Corsaire 2, are up to 0.85 metres wide, 1.6 metres isn’t wide enough for a utility or busy leisure path. (http://www.chariotcarriers.com/en/gb/products/touring-series/corsaire/corsaire-2-_-10100226)

Add the lack of lighting and seclusion of much of the path, it is not suited to utility cycling as many citizens, particularly females, would be deterred from using it after dark.  I assume that any site visits by Sustrans were made during the day.  The debate focused on the former railway line is not going to improve the situation for cycling on the local streets as a way to access the town centre, local schools, etc. and ignores a campaign by local people to implement a town wide 20 mph speed limit.

I conclude that we need to have meaningful citizen involvement in design and decision-making to provide the infrastructures for cycling that communities want and need.  There are diverse individuals and groups in our communities and all need to be heard and be involved.   This requires that citizens’ views, mixed with peer-reviewed (academic) knowledge (not just engineering opinion or practice) have a direct and visible impact on shaping the design of bicycle routes, facilities and infrastructures.

The relationship between Sustrans and the council continues to be a mystery shrouded in fog despite questions being asked by citizens in private and at public meetings.  The Vale council dismiss criticisms because they claim to have to approval of Sustrans, and Sustrans claim that the decision-making is down to the council – or am I wrong?  Either way, neither party has had meaningful dialogue with the local community.

Whilst there is considerable academic writing on citizen participation, there continues to be a lack of it in practice, and the railway path in Penarth makes an interesting case study.

Penarth is a “seaside” town of 20,000 people just outside of Cardiff.  During the industrial revolution, Penarth was home to the highest density of millionaires per square mile, who having made their fortunes, often in the South Wales coal trade,  sought the cleaner air provided by Penarth’s seafront to which they added a promenade and pier and many parks.

Although the millionaires have moved on, the town continues to be a pleasant sanctuary from the city of Cardiff from which it is separated by a small stretch of water and linked to by road, rail and even a water bus.  The rail line from Cardiff now ends in the town centre, with the old railway line to the south that linked to the large town of Barry converted to a shared-use footpath or left neglected, although some has been built on in recent years.

Sustrans is a British charity  promoting sustainable transport and often act as consultants to local government. It is primarily responsible for the National Cycle Network, which consists of off and on road sections, often utilising canal tow paths and former railway lines.  Sustrans have been criticised for hindering attempts to reopen railways lines.  Sustrans is also involved with Safe Routes to Schools, Safe Routes to Stations.

Ian can be reached at ianenvironmental@googlemail.com/

World Streets Letters are periodically  shared with our readers by friends and colleagues  working actively in different parts of the world in the field of sustainable transport and sustainable cities.

TESTING IDEAS, CONCEPTS . . . and listening to what my colleagues and readers have to say.

This work by World Streets is licensed under a Creative Commons NonCommercial 4.0 License.